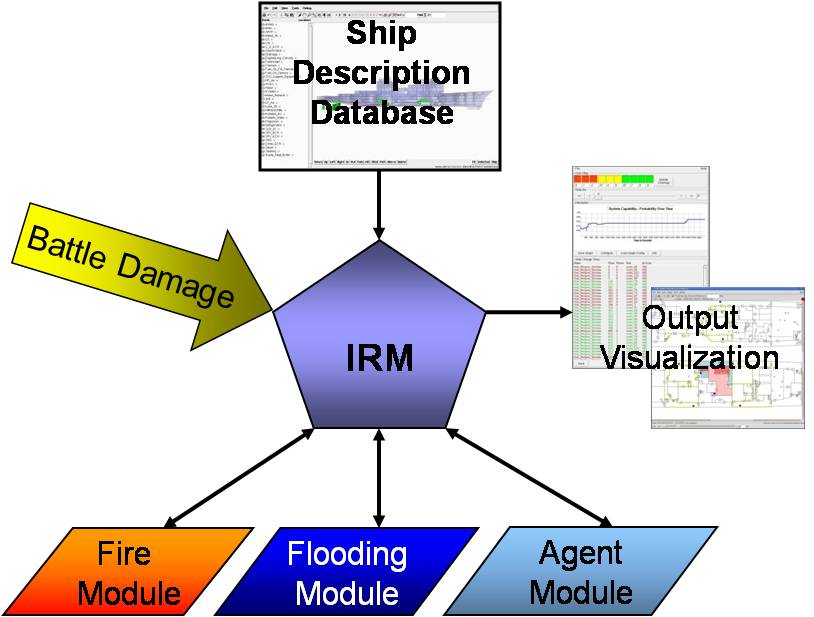 The IRM was initially developed to provide the DDG 1000 and Cruiser Modernization Programs a means to evaluate shipboard vulnerability over time, considering the effects of secondary damage (fire, smoke, and flooding), system interaction, and damage control and recovery efforts. The development of IRM was influenced by lessons learned from the DDG 51 Class Total Ship Survivability Trial (TSST), development of Automated Common Diagrams (ACD), and Ship Survivability Design Improvement (SSDI) studies.

The network connectivity aspect of the simulation allows IRM to analyze the impact of different system alignments and component characteristics to determine their impact on ship vulnerability and recoverability. In order to take maximum advantage of the full capability of IRM, detailed ship system information is needed, such as data connectivity, power and cooling requirements, etc. The levels of detail to be included in the IRM ship description database will generally correspond to the design phase of the ship. The IRM uses a ship description database which can be manipulated by a graphical database editor. This tool allows the users to view the database in an interactive deckplan, 3-dimensional, or isometric view. Basic database information such as structure and equipment locations can be imported from electronic tables or CAD files. Representations of structure and equipment can also be generated and manipulated from scratch using drag and drop type functionality with easy access to function and attribute tables. Connectivity and system interaction is established by routing cables, pipes, and ductwork between components and assigning resource supply and consumer relationships. Libraries of common components can be used to quickly generate systems with realistic interactive behaviors. Personnel are modeled with assigned skill sets, protective gear status, and movement attributes. Component attributes include manual actions and skill sets required for operation.

A rigorous process is used to acquire ship system information, perform database verification, and vet modeled behaviors with subject matter experts (SMEs). Manuals, design drawings, and engineering notebooks are used to develop an initial representation of the ship. Standardized pre-process steps ensure all components have appropriate connections and attributes, populate cross indexing fields in the relational database, and calculate appropriate geometric translations for use by the fire and flooding models. Individual systems are run through a set of standardized regression tests to verify proper interaction behaviors between various types of components. Testing is conducted using a series of initial conditions and damage cases to determine system level response. This information is then shared with SMEs to elicit feed-back to modify model parameters as necessary. A readiness review is then held prior to proceeding with production runs. 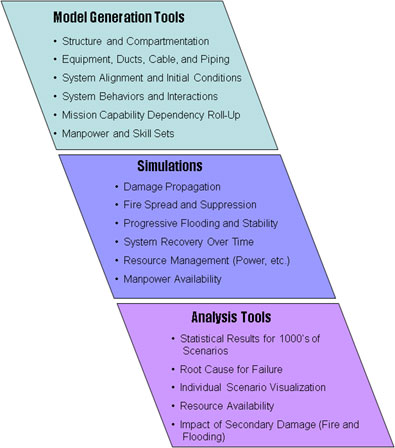 Once a scenario is initialized, the IRM emulates the system response to piping ruptures, severed cables, damaged components, and injured personnel. Fire and flooding simulations use a common database with the IRM simulator to coordinate the state of the ship and location of secondary damage at every time step. Modeled components can become damaged when they are exposed to appropriate thresholds of heat or flood water. Damage control efforts, including manual fire fighting and dewatering, interact with the Fire and Flooding Modules to determine the ability of the ship and crew to contain damage. The status of all components, resources, compartments, and crew over the course of each scenario coalesce into a single output log which can be played back for individual scenario analysis or mined for statistical results over many runs.

The IRM software suite was used by Test & Evaluation Solutions, LLC in support of the U.S. Navy DDG 1000 Program and CG47 Class Modernization Program.  It is currently being used to support the U.S. Navy Littoral Combat Ship Program. Verification and Validation has been performed and documented and the IRM software suite was accredited by the DDG 1000 Program.

The IRM software suite has been used in support of the following U.S. Navy Shipbuilding Programs:

Verification and Validation has been performed and documented and the IRM software suite was accredited most recently by the LCS Program in Septemebr 2019.

Additional information on the IRM software suite can be found at www.irm-software.org or obtained by contacting:
Dan Foos at 540-349-9885 x205 or by e-mailing dfoos@tnesolutions.com.